The weekend brought an opportunity to explore Beijing, so we found a bicycle rental place online (www.bikebeijing.com). They offer guided tours in English of the Forbidden City and ancient alleyways (Hutongs), and nighttime tours. We arrived at the shop (No. 81 – 3 Beiheyan Street, Beijing) too late for a tour, so we rented two bikes for 100 RMB each and took off on our own. We biked a hutong (ancient alleyway). It was very cool and crowded. We would love to go back there again. We biked around the Forbidden City and in front of Tian’anmen Square. There legislature/congress must be in session, because there were a lot of policeman and soldiers everywhere.

The bikes were GIANT brand city bikes, i.e., one-speed with a basket on the front handle bars. We biked a couple of ancient alleys, went around a series of lakes, then biked around the Forbidden City. It was a leisurely pace. We stopped often and took pictures. It took us about 2 hours.

We witnessed an altercation between a street vendor and policeman. We were on a bike path on the main street in front of Tian’anmen Square, which the police had barricaded at checkpoints. The street vendor was on his 3-wheel mini truck and gave the police offer a piece of his mind and tried to push his way through. I was waiting for a taser gun to come out, but the policeman held his cool. The vendor dislodged the movable, accordian-style, extending barricade enough to open a space on the other end, which another vendor promptly took advantage of and snuck through. Then as the policeman turned, the vendor also pushed his way through. Nothing happened. I don’t think the police officer was wearing a weapon.

Once we stopped to take a couple of pictures of Tian’amen Square but a police officer quickly came over and told us not to take pictures. But, these are the few I was able to take before I knew better. 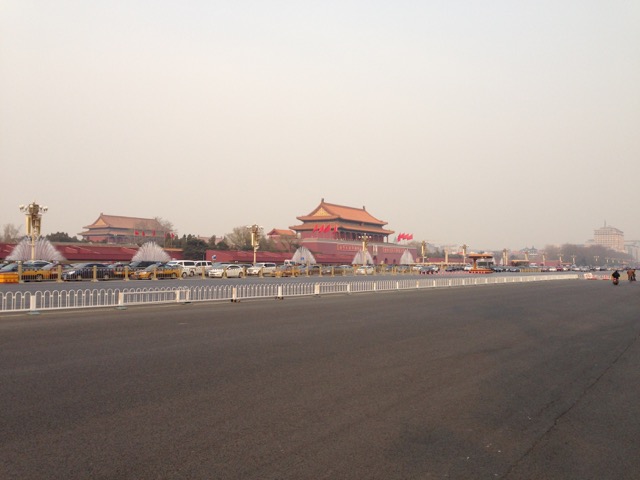 ← David Beckham on the Beijing Subway
Chinese is an Elegant Language →